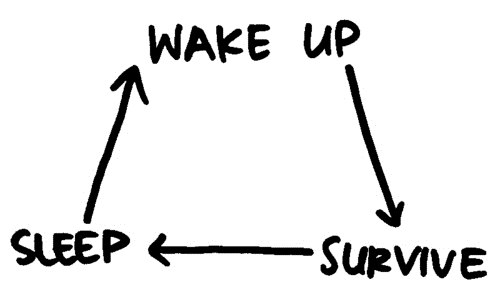 College students are no stranger to the phrase “enjoy it while it lasts“. Say it to them after finals and you’ll probably be met with “ugh anything is better than this”. In fact it never made much sense why people spoke so begrudgingly of the day in day out work place. Working for a company you asked to get hired to, doing the job you wanted to do, and getting paid for it? Show me where to sign.

I never really understood, until I saw this.

I saw it and for once, it made sense. I know it because even as an intern, I’ve begun to see glimpses. I talked to a close friend, one who’s already received her RD, about what life was like after. Never one to sugarcoat, she replied “I feel like life is pretty much over“. Huh.

A peculiar thing to say for someone following her dreams at the ripe age of 25. What happened was the wild, exciting, ever-changing world of college evolved into a rinse-repeat cycle.

I’ll be the first to step up and say, standing at the edge of the cliff, 5 weeks before I’m thrust into the world, this scares me. But not because I’m worried about jobs. I’m worried that my life, like so many others, will turn into something that passes by in a blink. Wake, survive, sleep.

I’m scared but excited. I’ve made a conscious effort to follow passion rather than dreams of dancing dollar signs. Steve Jobs once said, “stay hungry, stay foolish“. Should I find myself bored, nutrition is a technicolor beast. At least, that is my reassurance.