Every year I like to do a post highlighting some of the trends in nutrition for the previous 12 months. It’s a way of peeking in at the underlying forces driving us, to try predicting what we’ll see in 2015 and beyond. If you haven’t checked out last years version, take a jump over to True Trends Don’t Lie real quick.

For all of these I use Google Trends to see what’s being searched, you can do it yourself if you’re curious.

So without further ado, here’s what Nutrition looked like in 2014.

2014 was definitely the “year of the wearables”. Although Fitbit, Jawbone, and Nike had products on the market in years prior, we saw an explosion of competitors this year. These included big releases like Android Wear watches as well as lesser known ones like the Garmin VivoFit and the Misfit Shine. We are far from finished with this trend and nobody has really cornered the market. I expect with the Apple Watch release next year we will see who can keep up and who gets cannibalized by the market.

This chart goes back to 2008 but what it shows is that Food Tracking is a great place to spend your investment dollars. With significantly improved integration between food trackers, phones, and wearables we will see this market continue growing well into the next few years. Speaking of which…

Apps for diet and calorie tracking seemed to be everywhere this year. Every time I opened the news I saw someone new on the market. My personal favorite at the moment is Fooducate for it’s ability to scan barcodes and give a breakdown of why it is or isn’t healthy. Although it looks like they peaked in 2013 I think the rise in game-changer wearables will reignite the trend as integration improves.

My favorite chart each year, every January there’s a little uptick for new resolutions and then it gradually slides back with the holidays being the worst of all. It’s like seeing human eating behavior in a single picture. The red block is 2014 so far. 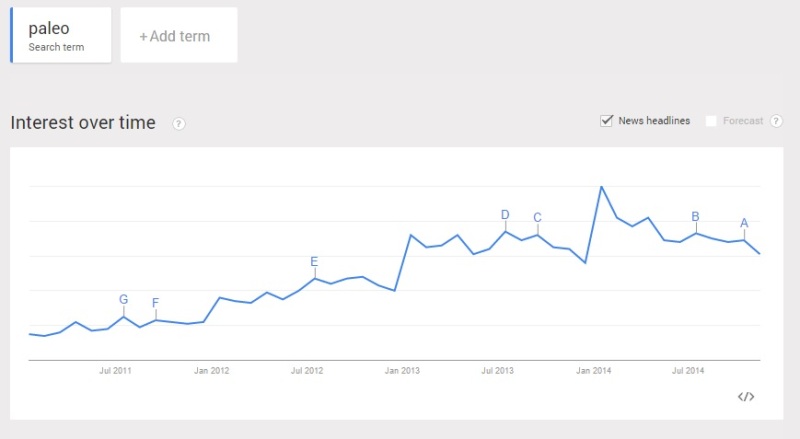 The Paleo diet is one I’m sure you’re all aware of by now. It spiked hard and fast in 2011 but has been on a gradual decline since the beginning of this year. I won’t count it out just yet but we’ll have to wait to see if January reinvigorates its falling numbers.

Another popular one, the Ketogenic diet this year shows stability greater than that of that most other diets despite it coming to fame around the same time as Paleo. Anyone who’s tried this care to comment on how they liked it?

Not a diet per se but consumer focus on gluten-elimination and gluten-free alternatives continues it’s climb. Trends did show the first major dip in interest this year but time will tell how far the market will take it. I suspect we’ll see a significant drop and then a long plateau as people try it and decide whether it fits them.

The powdered foods craze is far from over but for now the interest is on a slow rise. You can see at “E” where the first story about Soylent came out and again at “C” when their kickstarter far-outsold expectations. From the sounds of it they continue to have distribution issues which could be encouraging users to try out competitors like Joylent and 100% Food.

One market that saw significant interest this year was the food delivery services like BlueApron and Plated. With increasing demand for the Slow Food Movement people are starting to take notice of services that provide easy to prepare gourmet meals. 2015 will see big supermarket players like Whole Foods step into the domain of home delivered meals and groceries as well.

To all my fellow Dietitians out there, keep up the good work! I dare say I saw more online discussions defending the need for an RD nutrition expert than any year prior to 2014. The dotted lines are Googles own forecasting showing increased searches for Dietitians in 2015 so expect the field to continue growing as demand for evidence-based information spreads.

2014 was a great year for health and I think we’re entering the next technological overhaul for everyday living. Computers have changed nearly every aspect of our lives yet we still have people counting carbs by hand and keeping a paper journal of what they ate. 2015 will be the emergence of Digital Health and it’s integration into everything around us. I hope you’re as excited as I am.